Eleven officers of the Ghana National Fire Service (GNFS) have been dismissed after they were fingered in a recruitment fraud.

The officers, according to a statement from the service and addressed to Daily Graphic, were fired on the grounds of indiscipline.

The statement indicated that those dismissed were composed of two senior officers and nine junior ranks.

Further details showed that the officers partook in various indiscipline acts that ranged from the vacation of their posts to their involvement in recruitment fraud.

“Service would like to assure the general public of its commitment to uphold the highest disciplinary standards and shall always take appropriate disciplinary action against recalcitrant officers.

“Management would also like to encourage the General Public to report any acts of indiscipline against any personnel of the Service or call the Public Relations Department on 0299341436 for any enquiries, clarifications or complaints,” the statement signed by the Public Relations Officer of the GNFS, T. Osafo-Affum, on August 5, 2022, said. 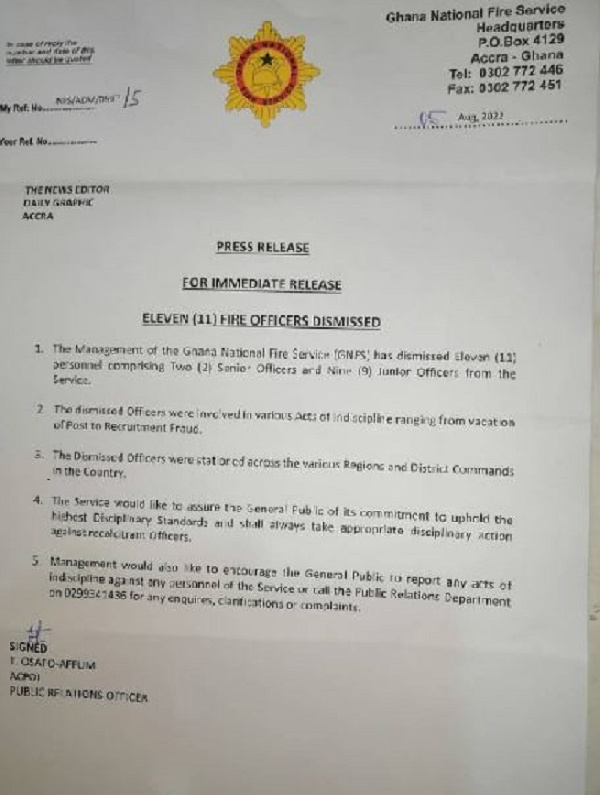 Financing of govt’s budget has predominantly been from the banking sector...

masemtvgh.com is your news, politics, business, sports, entertainment, a lifestyle website. We provide you with the latest breaking news and content straight from the motherland Ghana and other countries beyond.
Contact us: ceo@masemtvgh.com

Financing of govt’s budget has predominantly been from the banking sector...